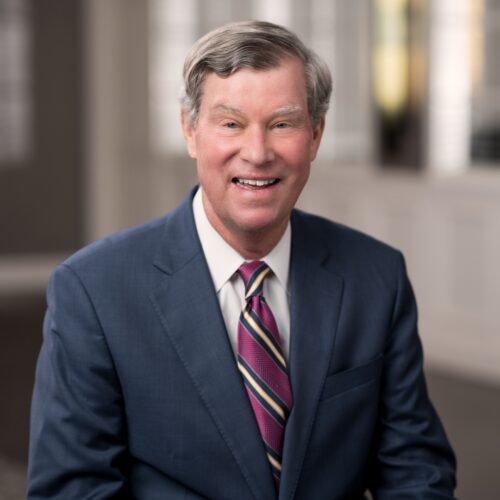 Gerard T. Carmody has been litigating cases for more than 40 years, trying more than 100 cases to conclusion in state and federal courts. He is a Fellow of the American College of Trial Lawyers. Mr. Carmody concentrates his practice in commercial, real estate and employment litigation. He has acted as lead trial counsel for a variety of clients, including the Archdiocese of St. Louis, Anheuser-Busch Companies, Inc., Cortex, the National Football League, Saint Louis University, Washington University, and Target Corporation.

For over 20 years, Mr. Carmody has been recognized on The Best Lawyers in America® list. He was recognized in the areas of Commercial Litigation, Eminent Domain and Condemnation Law, Bet-The-Company Litigation, Labor & Employment Litigation and Real Estate Litigation. In 2001, 2005 and 2007, he was honored by Missouri Lawyers Weekly as a “Lawyer of the Year.” For several years, he was selected by Missouri Lawyers Weekly as one of Missouri’s top three litigators. In 2008, Mr. Carmody was awarded the distinction of “Best Litigator” and the “Best Appellate Win” by Missouri Lawyers Weekly. He is regularly selected to the list in Missouri & Kansas Super Lawyers® and has been featured in St. Louis Magazine as one of the “Best Lawyers in St. Louis.” Mr. Carmody received the Missouri Lawyer Weekly’s Legal Champions Award in 2017 along with his daughter, Ryann Carmody, for their successful defense of a Catholic priest facing accusations of child sexual abuse.

Mr. Carmody was appointed by the Supreme Court of Missouri to serve on the Commission on Racial and Ethnic Fairness for the state’s judicial system. In 2017, he was a founding member of the Missouri Coalition for the Right to Counsel and received the 2017 Director’s Award for championing indigent defense in Missouri. Earlier in his career, he was elected by his peers to serve a six-year term on the Missouri Appellate Judicial Commission, which is responsible for nominating judges to Missouri’s Appellate and Supreme Courts. The St. Louis Daily Record published a story detailing the growth of diversity in the courts while Mr. Carmody was on the Commission. He also served a term from 2011 to 2016 as a Trustee of The Missouri Bar.

Mr. Carmody’s professional legal background is both broad and deep, and he is considered one of the most experienced litigators in the region. He has achieved successful jury verdicts for Fortune 500 companies as well as privately-held entities and government agencies. He also has represented major law firms in professional liability claims. He has obtained several multi-million dollar jury verdicts in real estate and commercial litigation matters. Among his successes was a $75 million jury verdict in the Eastern District of Missouri for a medical device company.

Mr. Carmody is a former assistant circuit attorney for the City of St. Louis where he was lead prosecutor in over thirty felony jury trials. In 2018, Mr. Carmody was appointed as the Special Prosecutor related to an investigation of possible perjury charges involved in the prosecution of former Governor Eric Greitens.